After reading this review of the most popular nootropic coffee blends, you’ll know what you want and need from this type of coffee.
By
Alex Miller 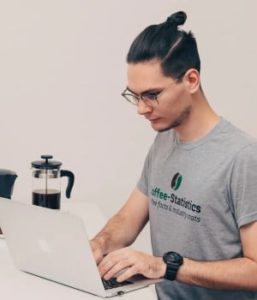 Alex Miller
Alex has never been professionally involved into the world of coffee, however he knows much more than any average barista. Being an avid coffee lover, Alex is constantly searching for new tips, tools, and techniques to make his morning cup of java even more perfect.

Mary has been dealing with coffee almost all her life long: in her teenage years, she worked as a barista in a number of well-known coffeehouses, later developing her knowledge and skills while studying at the university as well. Several years after graduation, she managed to open her own small coffee bar.

If you’re new to nootropic coffee or you’ve tried and loved it, here are reviews of several popular choices to add to your home! Below we reviewed the products based on ingredients, coffee type, grind, roast, and price. With all of these featured combined, nootropic coffee provides a mental clarity perfect for the morning.

Whether you like a sweet vanilla latte with mushrooms or espresso with yerba mate, nootropic coffee is a fantastic way to get energized in the morning. All of the coffees below are delicious when added to your favorite café inspired drink. Throughout this review, you’re sure to find the perfect brew of the best nootropic coffee. Whether you are needing a dark roast, or a fine grind, or a premium blend, we’ve got you covered. 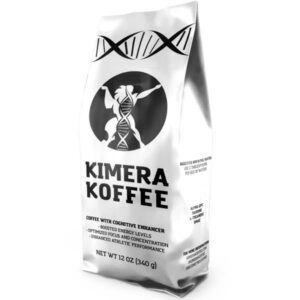 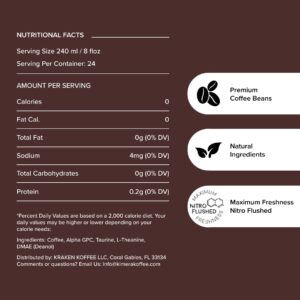 Kimera Koffee brings forward a vegan, natural, organic coffee infused with nootropics. Part of Kimera’s balance performance blend, this coffee provides a unique formula to give the best boost to your brain. This product offers much more cognition than a simple mocha latte.

Top Shelf offers leading cognition in terms of nootropics as well as leading quality in this top-shelf grind; it is a coffee that can make any morning brighter. This coffee brew includes cognitive enhancing benefits such as enhanced creativity, increased intelligence, and heightened focus. Unlock top thinking and cognitive clarity with this ground coffee from the Top Shelf. With premium dark roast coffee and lion’s mane mushroom. These mushrooms, grown in the United States and are among the best in the world. 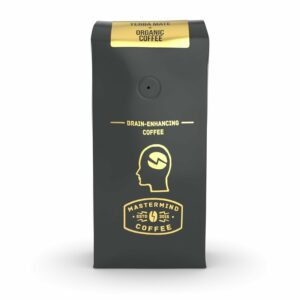 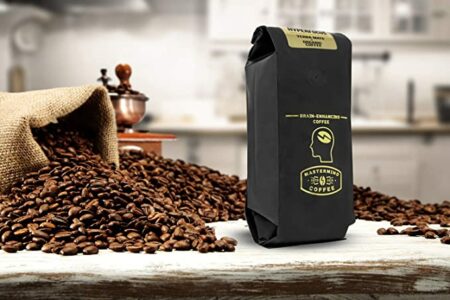 Do you want an unfair advantage for your day? Nootropics coffee is more than just a cup of coffee. It makes you produce that much more! That’s exactly what Mastermind brain-enhancing coffee is here to do.

This whole bean medium roast coffee is a great option for anyone wanting to boost their mental clarity and daily energy. Don’t settle for an inferior cup of coffee. Mastermind brain-enhancing coffee is a healthier product with unbelievable taste and high quality. A single sip of Mastermind Coffee is a great boost for the day.

Why are we impressed?

What negatives must you be aware of?

Nootropic coffee takes a standard cup of coffee to a whole new level. This additive can enhance cognitive performance such as focus, energy, intelligence, and focus. Four Sigmatic is great for anyone working on schoolwork, graduate studies, meeting notes, work assignments, passion projects, or even the usual day-to-day of life.

Supercharge your day, starting with a sweet sip. With all-natural brain-enhancing ingredients, including lion’s mane mushrooms, this isn’t your usual coffee. Organic lions’ mane mushroom is known to be a natural nootropic. This ingredient alone is shown to support cognitive function, memory, focus, and concentration. More than that, the mushroom provides antioxidant properties to support overall wellbeing.

Why are we impressed?

What negatives must you be aware of?

What is nootropic coffee, you ask? A Nootropic, or smart drug, is an ingredient that enhances cognitive performance such as creativity, focus, energy, intelligence memory, and motivation. VitaCup Lightning nootropic coffee takes that to another level. It is known and loved for its attentive properties; adding nootropics is a way to multiply its benefits while increasing focus, memory, and creativity.

Not only is this great for those in school or in university but also those that are working on their career, or their home, or their family. Supercharge your cognitive abilities! With all-natural brain-enhancing vitamins, this isn’t your normal coffee grounds. Whether you’re studying for final exams, writing midterm papers, or getting ready for a late meeting, nootropic coffees can help.

Everyone has a morning ritual that starts with a cup of tea or, typically, coffee. Finding the perfect nootropic coffee is essential. Are you looking to add more coffee to your dining parties or late-night studies? What about gifts for the health nerds, keto coffee lover, or coffee connoisseur on your gift list? This is an excellent option for all of the above.
Nootropic coffee offers something more than just the typical java. Besides the energy, it provides even more mental facilities and cognitive functions. Nootropic coffee increases productivity by improving your ability to think, focus, and create.

What are nootropics? That’s a good question. The simple answer is that nootropics are that its substances that can boost the brain’s performance. There are also known as cognition enhancers, memory-enhancing substances, or simply smart drugs.

Is Coffee a Nootropic?

The technical answer is yes. Coffee improves the brain’s capacity for clarity, but nootropics go beyond the mental clarity of coffee. It’s more than just not being tired or even adding energy.

How to Choose the Best Nootropic Coffee

Nootropic coffee is more than just a cup of coffee. The best nootropic coffee comes down to personal taste and individual decisions. The below comparison will help you form an informed decision.

Each brand of nootropic has distinctive features for different preferences. Take these features, for example; there’s more to a cup of coffee than its taste. There are many things to consider when shopping for nootropic coffee online or at your local coffee shop.

Whether you’re sitting in a meeting or starting the day late, a nootropic is a great option. But, finding the proper nootropic brew can be challenging.

Making smart choices about one’s health starts with knowing what’s in the food one’s consuming. It is the same for nootropic coffee as it is for shopping at the grocery store. These kinds of coffee can include a range of nootropics such as Alfa GPC, caffeine, Creatine, L-theanine, L-tyrosine, Taurine, and some types of mushrooms.

A grind describes how finely the coffee beans are ground. The purpose of grinding coffee is to increase the accessible surface area to allow more water to access it. A finer grind will allow the water to pass through quickly, making for a faster steep. It’s the opposite for a coarser grind. This impacts both the brewing time plus the amount of caffeine and flavor.

Unlike other kinds of coffee, Mastermind Coffee Brain Enhancing Coffee comes in a whole bean for an extremely specific reason – to grind your own coffee at home.

The roast of a coffee can range from light roast, medium roast, and dark roast. The significant difference is the flavors and the caffeine content. As the coffee bean roasts, it loses the caffeine content and original flavor. This means light roast has more caffeine and a softer taste. Choosing a roast depends on personal taste.

Dark roasts such as Top Shelf Mushroom Coffee and VitaCup Lightning Dark Roast typically have a much deeper, richer, and stronger taste without as much caffeine.

Nootropics tend to be more expensive than a cup of coffee at Starbucks, but it provides an additional cognitive benefit.

Having a higher price tag means a higher quality product, especially in the case of Kimera Coffee. This organic coffee comes highly rated even as one of the most expensive options in this review.

The Benefits of Nootropic Coffee

Nootropic coffee has more than just an energizing benefit. There are many more. Nootropic is known as a smart drug which is true for the most part. It may not create superheroes or geniuses overnight, but it can improve mental functions such as memory, focus, intelligence, and creativity.

However, there are additional benefits to these kinds of coffees. These can improve the symptoms of medical conditions of attention deficit hyperactivity disorder (ADHD), Alzheimer’s disease, and even narcolepsy. These nootropics allow the drinker to take charge of their brain and their day.

These allow for people to take charge of their day with the added benefit of mental clarity and positivity. Imagine what could be accomplished in a single day with an extra helping hand. It could be an extra hour of focus, an additional page on your term paper, another file finished up for tomorrow. Put your day in your hands.

Is Nootropic Coffee Safe to Drink Every Day?

Nootropic can be safe to drink regularly if you are aware of the risks, downfalls, and how to counteract them. Be careful to avoid taking these too often or too much in one day and, of course, addiction. In a 2012 review of nootropics in the journal Brain and Behavior Trusted Source Prescription stimulants in individuals with and without attention deficit hyperactivity disorder: misuse, cognitive impact, and adverse effects | NCBI Prescription stimulants are often used to treat attention deficit hyperactivity disorder (ADHD). Drugs like methylphenidate (Ritalin, Concerta), dextroamphetamine (Dexedrine), and dextroamphetamine-amphetamine (Adderall) help people with ADHD feel more focused. www.ncbi.nlm.nih.gov , these were shown to be highly addictive. Contact your physician or health provider to ask about regular nootropic use.

Why Is Nootropic Coffee Best for Focus?

Nootropic coffee has not only the benefits of regular coffee but also nootropics. The coffee provides mental clarity while stopping lethargy, drowsiness, or confusion from fatigue or exhaustion. Then nootropics add to it by assisting with mental focus and intelligence. Added together makes them better than their parts separate.

Do Nootropics Have Any Negative Side Effects?

Nootropics have similar adverse side effects to caffeine, including increased blood pressure, a faster heart rate, insomnia, sleep disturbances, anxiety, addiction. Nootropic adverse effects can include headache, gastrointestinal issues, dizziness, and dry mouth Trusted Source Are Nootropics Safe? | Psychology Today In the 165 human placebo-controlled studies on 77 nootropics with 7,152 experimental group participants we’ve reviewed for the Nootralize app, there were no serious adverse effects observed to be significantly more frequent than in the placebo groups of the studies. www.psychologytoday.com . Drinking or eating these nootropics in moderation is the key to avoiding many of these negative side effects. It’s best to consult your physician to learn how nootropics may impact you.

Through this review, we’ve found a vast range of nootropic coffee, and three of them stuck out to us. The editor’s choice – Kimera Koffee Original Blend, the premium pick – Top Shelf Mushroom Coffee, and the Most potent option – VitaCup Lightning Coffee are all top options.

Sitting at your kitchen table with a warm mug of Kimera Coffee, or a tall glass of iced Top Shelf, or an espresso shot of VitaCup Lightning Coffee, you’re able to take on your day.

1.
Nootropics Market To Reach USD 5.32 Billion By 2026 | Globe Newswire
According to the current analysis of Reports and Data, the global nootropics market was valued at USD 1.96 billion in 2018 and is expected to reach USD 5.32 billion by the year 2026, at a CAGR of 13.2%.
www.globenewswire.com
2.
Prescription stimulants in individuals with and without attention deficit hyperactivity disorder: misuse, cognitive impact, and adverse effects | NCBI
Prescription stimulants are often used to treat attention deficit hyperactivity disorder (ADHD). Drugs like methylphenidate (Ritalin, Concerta), dextroamphetamine (Dexedrine), and dextroamphetamine-amphetamine (Adderall) help people with ADHD feel more focused.
www.ncbi.nlm.nih.gov
3.
Are Nootropics Safe? | Psychology Today
In the 165 human placebo-controlled studies on 77 nootropics with 7,152 experimental group participants we’ve reviewed for the Nootralize app, there were no serious adverse effects observed to be significantly more frequent than in the placebo groups of the studies.
www.psychologytoday.com